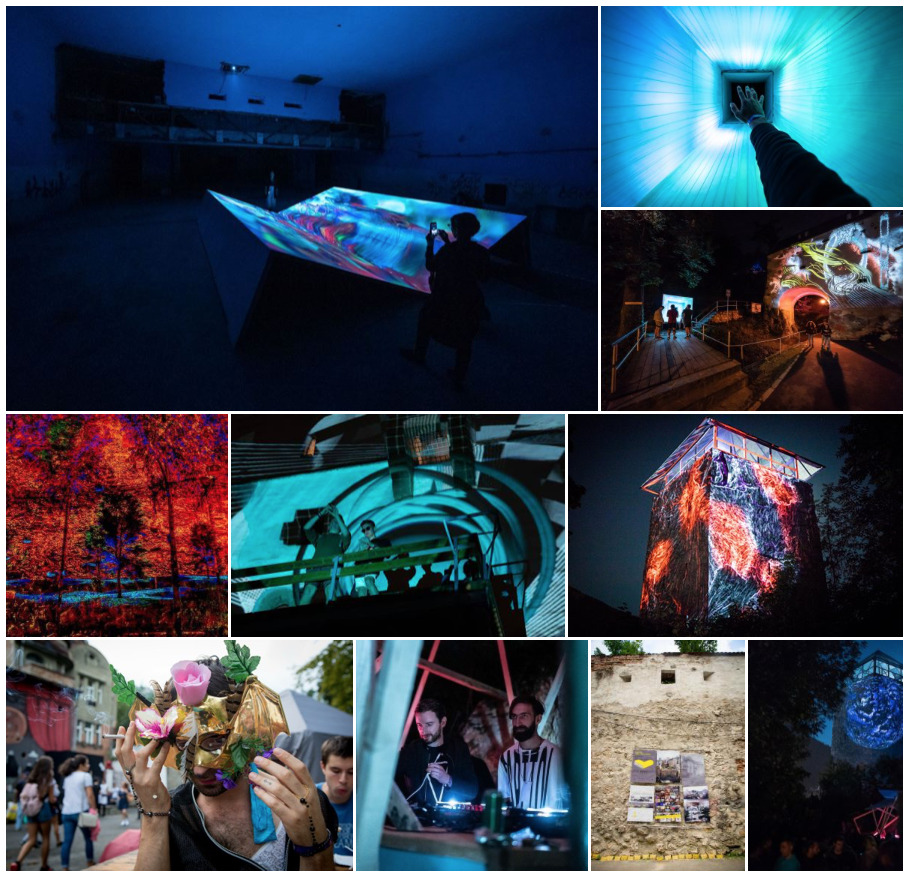 The Amural Festival opened the gates of Brașov for the greatest celebration of contemporary visual arts. Our Capitol Cinema / Summer Theatre campaign team has been travelling and meeting a lot of interesting people with similar visions and projects that proved to be an inspiration to us. The presence of the Capitol within the fourth edition of the Amural visual festival produced a three-pronged installation: the Capitol exhibition, Capitol Talks, live performance #FLUID.

The Amural A4 edition was an experience that we fully enjoyed. The festival had two parts that complete and support each other. During the four days of the festival, you could admire many art installations and exhibitions on the After Walls or the White Tower. In the evening, the program was intensely diversifying and the whole tour between the Popular Cinema, the White Tower and the Black Tower was coloured, animated visually and audibly by a lot of musicians, VJs and artists who stimulated all your senses, turning a small but significant part of the central Brașov in an outdoor exhibition, augmenting the buildings in this area.

The tour started with Popular Cinema, inside which Maotik placed an object that resembled an open book on whose pages a video story was unfolding. On the outside, Mr. Thoms’ drawing, created in 2016, was still there. Right next to it, on the wall that gave the name of the street, we placed the Cinema / Summer Capitol exhibition.

From the alley that climbed up the hill you could reach a relaxation area where you could have an overview of the wall or see the two entwined wires wolves closely.

After you passed through the ephemeral and lively installation by Ein helles Schwarz and Markus Puhlmann (DE) you could get to the drawing painted by Colectivo Licuado.

Then followed a number of exciting, interactive and dynamic projections and video mapping where you could actually lose yourself for a few moments. Continuing up to the Ambiental area, you could discover Rizi‘s Poemtry.

Why did we travel to this festival? We were connected with the Amural team and we were glad to discover that one of the main goals of the festival was the reactivation of the Popular Cinema situated in the historical centre of Brașov.  We realized right away that we had many things in common that were worth exploring, so we soon planned to participate in the festival and visit Brașov.

In order to convey to Brașov citizens our message of awareness towards abandoned cultural buildings focusing on the Capitol Cinema / Summer Theatre, and in this case the Popular Cinema, we prepared an exhibition that included essential and memorable moments, a part about the historical past and perspectives on the possible future where these spaces will be reintegrated into city life and the public circuit. Together with some full of energy volunteers, we were able to expose the plaques right on the Wall that gave the name of the street and pack a few hundred stickers, postcards, posters, along with the project manifesto, which we quickly distributed throughout the festival along with several screen-printed shirts manual by Octav Avramescu in the workshops for children from the Contemporary Art Museum in Bucharest.

Another interesting thing was that we met friends, colleagues, buddies, partners or collaborators.

We discussed with many of them about the reactivating the heritage buildings that could serve many artists, designers, writers, directors, producers, actors or musicians as space where they can manifest their creativity or make themselves known, – showing their work in a public space for those interested and present. In a material published some time ago by a national television, Cristian Mungiu, the internationally acclaimed movie director, said it was absurd that these cultural products would only be viewed by a foreign public, whereas in Romania, out of 600 spaces allocated to cinematography, only a few would be active under difficult-to-describe conditions. At Amural, Eva Pervolovici, the director of the movie Marussia, told us about her recent adventures in trying to distribute the movie in some of the local functional halls.

On Saturday, we replaced the exhibition that had been devastated by the rain during the previous evening. Then we had a talk with the Amural festival organizers, who were glad to have such a successful edition supported by the local authorities, which facilitated the expansion of the festival in several places at the same time and raised the interest of a large audience and curious passers-by. Immediately after dusk, the lights of the projectors began to animate the facades of the buildings and the installations produced by local and international artists.

After visiting the exhibition from the new Visssual alternative space on the Factory street, we went back to the stage near the Black Tower, where the artist Ada Kaleh made his new productions heard in the centre of Braşov. The previous evening, in the same place, Max Cooper had made a performance which carved the space in a visual and audio manner simultaneously.

On Sunday we started the program early, preparing a series of articles and posts on Facebook and Instagram for those who could not reach the festival and have been following us online. Then we visited Alina Marinescu‘s exhibition, named “Out of Love”, Martin Balint‘s works “BLO500 or how to shape undisclosed identities” and the paintings of Ion Văcăreanu from the Multicultural Center of Transylvania University in Brașov.

Up at the White Tower, during the day, the pals from One Night Gallery organized the collective exhibition of Paul Dersidan, Bianca Dumitrașcu, Sweet Damage Crew, Nicăieri von Băraru, Victor Fota, Livia Fălcaru and Raluca Băraru. In the evening you could watch a series of movies or enjoy a wonderful view from an outdoor cinema above the city.

In the evening we met #FLUID (Paul Dunca – performer, choreographer, playwright and Alex Bălă – musician) to listen to the new productions and to experience the effervescent energy of the two artists on the Popular Stage. We have traveled a musical and performative trail, an insight into the history of Bucharest’s scenic space, especially with the story of Capitol Summer Theatre and Cinema, located in Bucharest on Constantin Mille Street. The track that gave the performance name, The Stage is Yours, can be listened exclusively to electronbeats.ro, right here.

The second intervention of Micleușanu Mitoş in Amural was a performance of Febre39 alias, which in 20 minutes manages to cover all the existing problems in a unique and funny way, while also firing several alarm signals.